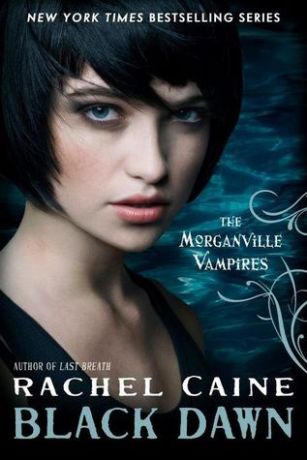 The hotly-anticipated twelfth instalment in the Morganville Vampires series

In Last Breath, the rain brought a new and dire threat to Morganville and its vampires… their ancient enemies, the draug. Now, the vampires are fighting a losing war, and it will fall to the residents of the Glass House: Michael, Eve, Shane and Claire, to take the fight to an enemy who threatens to destroy the town, forever.

Lovers of Morganville, rejoice: Black Dawn takes the intrigue, romance and nail-biting suspense of the series to its highest level yet! From Goodreads

Wow Rachel Caine totally out does herself each and every book she writes. Let me just say that this book made me cry, laugh and smile. Claire, Shane, Michael and Eve are back together and are fighting the draug but this is the last stand basically. Claire and Michael have that fear that they are going to be taken again, which makes sense it was a terrifying to know that they are killing you slowly or breaking your neck like with Claire.

Naomi definitely isn’t what she seems which made me a little upset; I wanted her to be a Theo or even a Sam, mainly because I miss Sam. But it seems that she is a devious little one. Amelie is so much stronger than everyone but Oliver thinks. Michael is dealing with the fact that he attacked Eve. Shane gets taken by the draugs and has one of the most heartbreaking moments in that book. They find out why Claire can see Magnus but no one else really can.

Two characters die in this book and I can honestly say that I will miss them. They were good characters, one was a great person and the other was a little eccentric but good nonetheless. I don’t want to give too much away since the book just came out but I would definitely recommend you pick it up and read it. I would say that about the whole series.