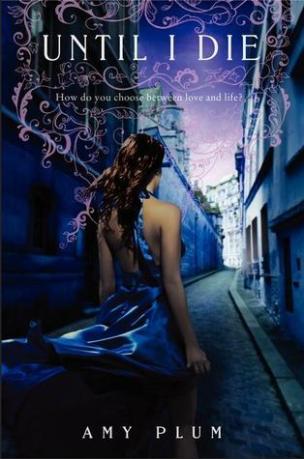 Until I Die by Amy Plum

Kate and Vincent have overcome the odds and at last they are together in Paris, the city of lights and love.

As their romance deepens there’s one question they can’t ignore: How are they supposed to be together if Vincent can’t resist sacrificing himself to save others? Although Vincent promises that he’ll do whatever it takes to lead a normal life with Kate, will that mean letting innocent people die? When a new and surprising enemy reveals itself, Kate realizes that even more may be at stake—and that Vincent’s immortality is in jeopardy.

In Die for Me, Amy Plum created a captivating paranormal mythology with immortal revenants and a lush Paris setting. Until I Die is poised to thrill readers with more heart-pounding suspense, spellbinding romance, and a cliff-hanger ending that will leave them desperate for the third and final novel in the series. From Goodreads.

Oh Amy Plum why do you do this to me? The ending was so heartbreaking and gave me hope at the same time. I was happy to see that Kate and Vincent were so cute at times, I really liked how they discussed a future. I really want them to have a future and be happy, they deserve it.

Now I miss Charlotte and even with his snarkiness, Charles. I am glad that Charles works through his issues. He wasn’t a bad guy, but Arthur and Violette that took their spots in the house, I was iffy with. Arthur had his moments that confused me because I couldn’t figure out if he was pro or against humans being in the know. Violette seemed like she wanted to be Kate’s new girl bff. This wasn’t going to happen because that is Charlotte and Georgia’s spot luckily.

The bad guy was literally the last person I saw coming. Okay maybe not the last person because that would be Jules or Ambrose. Who were in the book a little bit. Not as much as I would have liked because they are hilarious. Although you learned a little bit about Ambrose this time, you finally learn how Jules died.

The whole book was amazing, Paris is described beautifully. The characters are so realistic, they all have their flaws but they are willing to work around them to stay together.

I give this book 5 out of 5 stars. I can’t wait for the next book in the series.