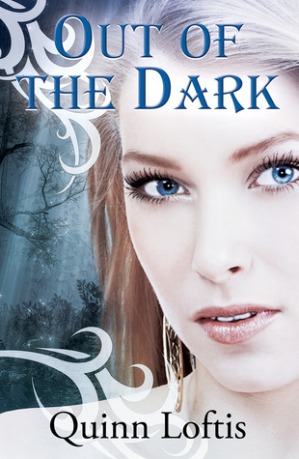 Out of the Dark by Quinn Loftis (The Grey Wolves #4)

Darkness has descended on the Transylvanian Alps.
Four packs of the powerful Grey wolves – in a rare show of cooperation – had joined together here in an effort to help their pack members find true mates. Then they were betrayed by one of their own – an Alpha hell-bent on becoming the most powerful of the Canis lupis. And though the wolf’s assassination attempt on the currently-reigning Romanian Alpha failed, his plans to get Decebel, the Romanian Beta, out of the picture were coming together even as his treachery was discovered. The wolf fled, leaving destruction, death, and a missing mate behind him.

Unbeknownst to the other packs, the wolf has employed a witch to finish the deadly job and help him gain another tool to increase his power. A curse of devastating proportions will cripple Decebel in a way that may dissolve his fragile bond with Jennifer. Meanwhile, injured and alone, Jen has been fighting for her life. She had come to terms with her fate, accepting that she would not share a life with Decebel, until help came in the most unexpected form…

Vasile will have to use all his resources – including Sally, the new gypsy healer of the Romanian pack – to discover a way in which to destroy the witch, lift the curse from Decebel and reunite him with the one woman who makes him whole, and solve a mystery that’s been surrounding the Romanian pack for 300 years. From Goodreads.

Oh geez. It is just getting crazier. Sally is a Gypsy healer, Jen and Dec are still separated but it is worse than ever since he was cursed to forget all about her, the curse was originally for Fane and Jacque, the mansion that everyone was staying at burnt to the ground because of a witch. It was crazy, luckily for Jen she was found by Grey Wolves that were hiding for that witch because the girl is a Gypsy healer and also a wolf.

Throughout the story I really, really wanted to cry for Jen and Dec. They went through so much and it just got worse and worse. Eventually they bonded and married. But tragedy struck again but luckily the Fey stepped in and saved the day. Literallly.

I don’t want to give too much away because the story is great from book one all the way through. But this time Sally and Costin are learning how to get along since there is a pull to each other but they don’t understand how because she doesn’t have any wolf blood in her. Just the Gypsy blood which is explained eventually by Jen and Jacque to her and Dec and Vasile explain it to Costin.

The battle was pretty epic but obviously it isn’t over since the reason why it happened at all was the witch and she managed to get away. I am hoping there is another book, I am sure there is but there isn’t any info out yet about it. I know I don’t give much away but I really like this story, she took another step with the werewolf legend and changed it up enough that made it completely different then most stories out there. I do recommend reading this series if for no other reason than the hot guys in it.